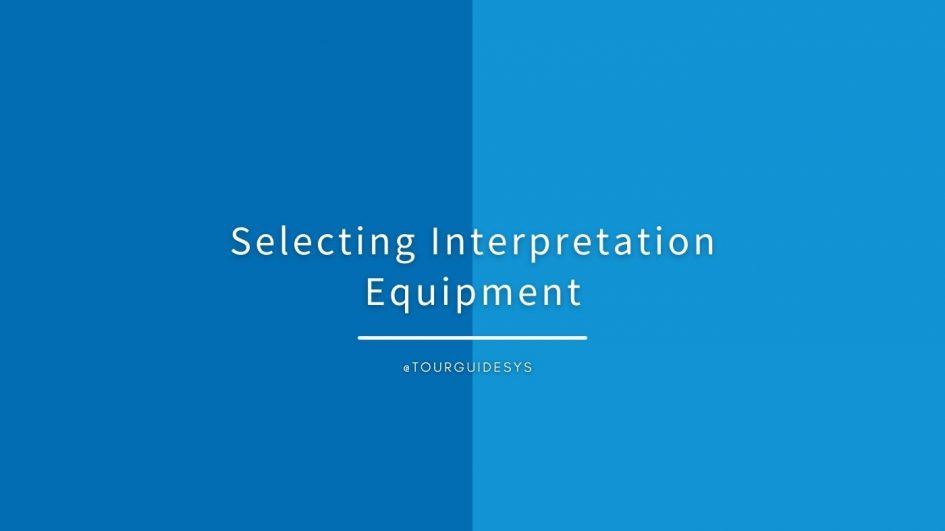 Here is a list of key items used for a wireless simultaneous translation setup, followed by a list of common terms used when choosing to hire interpreter equipment.

Transmitter. This is the equipment that will be connected to the interpreter console to transmit, or wirelessly distribute, the audio. Sometimes it is used on a stand-alone basis in small and less complex events. This can include base-station transmitters or mobile, body-pack transmitters. If infrared technology is used, the combination of an infrared modulator and emitter serves the transmission purpose.

Receiver. This is the equipment that the wireless listening audience uses to receive the audio distribution that is being transmitted. Some receivers have a built-in loudspeaker, while others require the connection of a headphone or earphone to hear the audio. Most receivers offer the option to select the channel along with adjusting the volume of the audio.

Interpretation Booths. Interpretation booths are used to provide sound isolation for the interpreters. The isolation serves two purposes. The booths allow the interpreters to work in a quiet environment, free from audible distractions, so they can focus on the words of the speaker(s). Inside the booths, the interpreters can speak at a normal volume in whatever language they speak, and not disturb the meeting attendees in the audience. The interpreters usually receive the audio feed from the floor by means of an XLR cable.

Radio frequency (RF) interpretation systems use radio waves as the audio distribution method. One can use either a portable battery-operated transmitter for small groups, or a mains-powered base-station transmitter that can greatly increase the broadcast range for a conference auditorium for example. The listening audience uses a RF receiver equipped with headphones to hear the interpreter. Multi-channel systems are used where several languages require interpretation – the audience delegate simply selects their language channel. The portable, battery-operated systems are light and easy to pack into a suitcase for transport from site to site. They also offer a solution for interpretation on the go for walking tours, in a museum or in a company’s manufacturing facility.

Large-area RF systems: If you have a large venue and an event with a sizeable listening audience, then you will need a more powerful base-station transmitter. These broadcast range from a single transmitter’s antenna is determined by the equipment and local licensing restrictions. The antenna/antennae can be connected directly to the transmitter or remotely placed for strategic coverage. These systems are transportable for delivery to a location. However, once installed, they must remain stationary. They require a little more time for set-up and break down of equipment at events.

Translation usually means converting from one language to another, be it in oral or written form.

Interpretation is specific to the oral translation of the spoken word from one language to another as it happens. Interpreting is a very complex task. The accurate communication is the most important aspect of any meeting, and quality interpretation will ensure its success. The audio needs to be heard and understood by the listening audience.

Simultaneous Interpretation. (sim. tran. or SI) Facilitating the communication of speech from one language to another in real time, allowing presentations or conversations to flow naturally, in multiple languages, without delay. The interpreted speech is usually heard by using a wireless audio receiver.

Consecutive Interpretation. This is where communication flows in a lineal approach, where one speaks and then pauses, so the interpreter can speak. The advantage to this is no special equipment is required. The disadvantage is it takes much longer and can disrupt the natural flow of the meeting.

Whisper Interpretation. In whisper interpreting, the interpreter sits or stands next to a small group of target-language audience while whispering a simultaneous interpretation of the matter at hand. This method requires no equipment, but may be done via a microphone and headphones if the participants prefer. This is common in circumstances where the majority of a group speaks the source language, and a minority does not speak it.

Language Distribution. This is the distribution of the audio of the interpreted languages to the meeting attendees. Usually, and most desirably, this is wireless. In the world of interpretation, there are two wireless technologies commonly used to transmit the audio — radio frequency (RF) or infrared (IR).

Here at Apple Sound Tourguide-SYSTEMS we have a range of rental equipment available for simultaneous translation (sim.tran.) for both portable applications (like walking tours), and for conference interpretation.

Theme by Anders Noren — Up ↑